Yes, the snow is nearly melted in our valley.  There are still patches under trees and on the north side of the old school house but otherwise we see bare ground, mud puddles and a few spring flowers pushing through.  The women are hard at it trying to get the current quilts finished by the end of April.  That is when things shift for us into the next season.

On April 28, it is Rendezvous in Eureka which mean vendors fill the Historical Village grounds and there is the largest parade of the year down main street.  The old school

house will be transformed from the place we quilt all winter into a book sale.  Stop by if you are in town to pick up some great bargains. Then in May school children take their annual trip to visit the museum. We also have a rummage sale, another opportunity for bargains and to get raffle tickets for a lovely quilt we made.  And finally on May 26, the Historical Village announces the summer season.  Everyday until Labor Day, volunteer docents will open all the buildings and are available to provide information to visitors from 1:00 – 5:00pm.

So now we are trying to get the last quilts finished up.  Jana, a guest from the Czech Republic, has been joining us to learn how to quilt and to share her travel adventures with the women as they sew.  Cathryn created a pile of new baby quilts that are perfect to welcome little ones to the world. Sally made some lovely children quilts that are for sale in the museum along with our full size tied quilts and, of course, the beautiful hand quilted ones.  If you are in town for Rendezvous or just ambling through the Historical Village grounds on a sunny afternoon, stop by to learn about our valley’s history and perhaps purchase a quilt to support this remarkable space.

We are working on a quilt with a history. I suppose that isn’t so surprising. Many quilts have history.  Do you remember that beautiful one made by an elderly quilter from Gee’s Bend?  It was pieced from her husband’s old work clothes.  She said every time she got under that quilt, she felt as though her husband was still with he 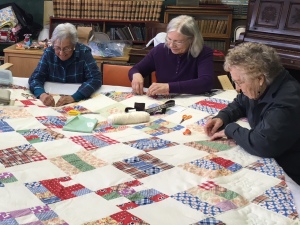 The quilt we are working on now came from Kentucky. The brother of a friend sent it to me. The women at the Historical Village think the fabrics are from the 1940s.  When it arrived in the mail, the top pieced with colored fabric and squares of plain muslin was stiff with age.  Bev carefully washed it and washed it, finally getting it to a point where it could be quilted. We found a large piece of muslin for the back. But how to quilt this slightly irregular beauty?  The pieced blocks are delicate and also aren’t exactly square. At the same time the colors and patterns are special enough we wanted to do more than simply tie it. 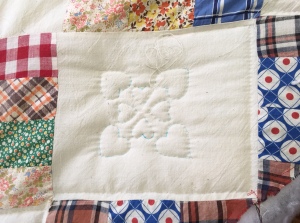 So Cathryn in her wisdom pointed out that we could quilt the plain squares and tie the remainder.  What a perfect plan for this unique quilt! A pattern with small hearts was selected.  It is a bit slow as the fabric tends to hold the needle but we are getting there.  It might be finished by late spring.  It is one of those quilts that has a lot of character although who is to say how long it might last.  Still it will easily grace whatever bed it ends up on.  Hopefully the person sleeping under it will feel cared for.

Doing this quilt is a reminder how it is not always necessary to stick with the usual plan.  Sometimes a dilemma presents itself that requires creative thinking.  The solution doesn’t have to be !00% of this. It could be 81% of this and 12% of that and 7% of something else, still getting the job done well.  Somebody might have looked at this particular quilt top and thought it wasn’t worth saving for much of anything.  But as we quilt and tie it, the women remark on the fabrics and interesting piecing.  We figured out a solution and are making it work.  Yes indeed, it’s a beauty.

This past Friday it snowed. A lot. And it didn’t look good. It wasn’t just the fact that most of us are tired of winter by this point, but the concern that bad roads might hamper people coming to the fundraiser in Trego on Saturday afternoon.  Saturday though dawned better with a bit of sun and so our anticipation became more optimistic.  But you never know do you with these community events if there will be enough people, if its possible to even make the costs of putting the thing on let alone raise funds to help support the Historical Village?  On top of the weather and other unknowns, there were questions about the event itself. We hadn’t really done anything quite like this before. A concert with a band from out of the area (actually The Wardens are from Canada so out of the country!) with a potluck and community jam to follow.  We had decided to do it in Trego because the hall there is so nice with great acoustics and a large kitchen, plus enough space if we did get a real turn out.  But would we? Would people drive from Eureka on snowy roads to support the Historical Village and enjoy this potentially great event?

Al went out early that day to get a fire going so the hall would be warm.  He also plowed the parking lot (thank you so much!).  The band arrived around 1:30 to start setting up.  Quilters and John Linn came a little later to hang quilts and set up tables for selling some handmade items.  With the concert scheduled to begin at 4:00pm, one might hope people would start to show up at 3:30ish but it started very slow.  Finally around 3:45 cars began to pull in and then more cars.  We had to set up extra chairs.  When people were still coming through the door at 4:00, the band decided to start a few minutes late.  What a fabulous turnout!  Over seventy people came to listen to great music, potluck with neighbors and then hang a bit for the jam.  Some people played music, some danced, some talked with friends, some met new people, some tried new foods (Dawn’s outrageous Bhutan momos).

It isn’t only the wonderful turn out but the energy people brought to the event that made it such a great evening.  Lots of laughter and hugs.  We sold a quilt and a box of Mary Louise’s homemade chocolates.  Some folks generously wrote checks to support the Historical Village.  Others asked for information to learn more about the Tobacco Valley Board of History.  And the help that made this all possible!  From John climbing his 10′ ladder to hang quilts to Mike washing dishes and Mircea mopping the floor.  Everyone pitched in to set up chairs and then at the end of the evening, to put chairs away.  Ray got the jam circle going, Ed helped the band carry their things out to the van, Patty and Darrell took trash bags to the dumpsters.  What a special evening…what a special community.  Thank you, Eureka!